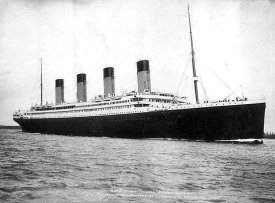 A poem about RMS Titanic

This year is the 100th anniversary of the maiden voyage and subsequent sinking of the Titanic. The White Star liner shipped from Southampton on the 10th April 1912, heading to New York. On the 15th of April, the Titanic struck an iceberg, eventually leading to the liner's sinking and the loss of 1517 lives. This Titanic birthday poem is to show a mark of respect for the original sailing date of the liner, and the ship's crew and passengers who sadly failed to reach New York during that maiden voyage.

I hope these Titanic anniversary verses do her and her victims some justice. This anniversary poem is dedicated to the launch, maiden voyage, and the eventual sinking of RMS Titanic.

The ship was crewed by those who best
knew how to sail this maiden quest,
whose aim to aid and please their guests
was put to some horrendous tests.

The ship, well built, was torn by ice,
its hull Poseiden's sacrifice,
and those on board were left to fear,
the damage done was far too sheer.

Lost upon its icy swell,
Atlantic swallowed Titan's shell.
Thousands trapped, too many left,
those in boats remained bereft.

Down she went, her fate assured,
the loss of many now inured,
A day that lives and always will,
in memories that linger still.

Titanic Poetry on her Anniversary

I hope this Titantic poem doesn't offend anyone, at least not for its simplicity. I admit to writing short but simple poems at the best of times, and even though this particular subject deserves much better (and indeed there is much better poetry about Titantic) I hope my little attempt at a short titanic song doesn't seem completely off base.

Send this birthday poem as an eCard

Send this poem as an eCard

It's now very easy to send this poem to a loved one as an eCard. Simply click on the link below the poem marked 'Send this birthday poem eCard' to begin.